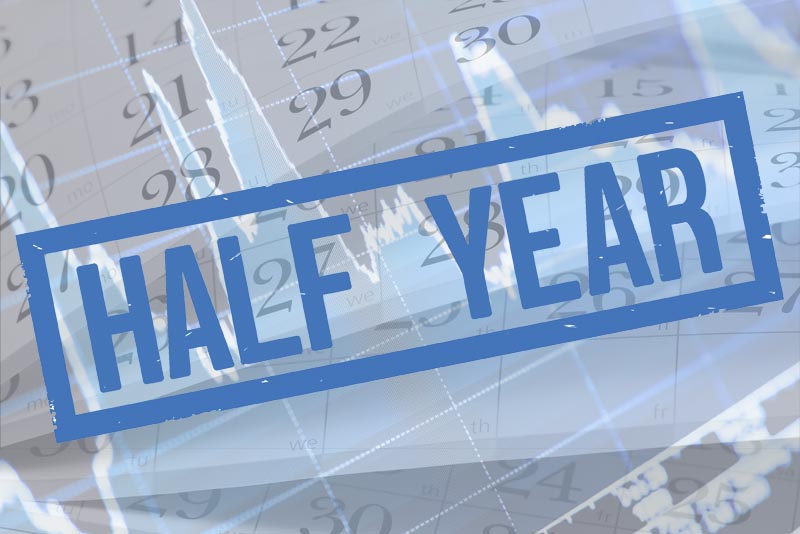 The three benchmark indices finished the first half of 2022 markedly lower, numbers that echo the economy. The S&P 500 fell 20.6%, the most in 52 years. The tech-focused Nasdaq Composite led all indexes, dropping a note-worthy 29.5%, the largest decline ever. The Dow Jones Industrial Average lost 15.3%, with its value stocks suffering less. It too had the worst half since 1962. The interest hikes, supply problems, job adjustments, and the evils of inflation all have affected the indices. Another interesting hike of .75 basis points is up next. Jerome Powell said on Wednesday (June 29) at the European Central Bank panel meeting that “no guarantee” the Fed can avoid a ” hard landing.” The jobs report, out today at 8:30 was strong, with the economy adding 372,000 jobs, nearly 104,000 more than expected. The report gives investors and traders a bit of ‘good news and direction regarding the future market’s actions. General stock market activity thru Thursday was stronger, marking four straight sessions higher, with shares gaining across the board. “What the market is wanting to see is that there is some cooling in the labor market, but it’s not going to want to see a crash,” said Kiran Ganesh, a multi-asset strategist at UBS. The yield on the 10-year Treasury note rose to 3.007% from 2.911% on Wednesday, The yield on the two-year note finished at 3.039% up from 2.961%. Bond yields rise when prices fall. Many economists and strategists think that the ‘tightening’ is taking hold, only time will tell.

The Electric dilemma gets more costly. Producers of electric vehicles have been quietly raising prices, as lithium costs are soaring higher. Battery costs are by far the most costly component in the production of electric automobiles. Lithium has doubled in price during the covid pandemic crisis, as has nickel, palladium, and cobalt, all serious commodities in the production of EVs. As consumers weigh the economics of owning an electric vehicle, versus a gasoline-powered one, the cost factor is becoming a serious concern. Presently EVs account for nearly 5% of U.S. purchases and are growing. The average EV cost is accelerating, up 22% from a year earlier, according to J.D. Power. As higher gasoline prices continue, EVs emerge as the only alternative, commanding heavy stickers. The competition will hopefully nullify some of the runaway prices.

The I-Bond Mania….and good reason. The high-powered savings bond is sweeping the U.S. with savings bond investors scooping up these high-paying interest tools. Paying over 9%, and with a maximum investment of $10,000 per person, their popularity is exploding. Investors are scrambling to secure their shares. The rigorous requirements to own are sometimes enough to discourage one’s from the process. Complicated as it is, the hefty interest rate is a bonus

in today’s low yields. The I-Bond is renewable each year when the account is functioning correctly. A three-month penalty occurs if the bonds are held for less than five years. The composite rate is a combination fixed rate and a semiannual inflation rate. The popularity is unparalleled, as the government has sold $14.4 billion in I-Bonds according to the treasury.

Howard Marks, Oaktree Capital Management co-founder and a leading distressed-asset investor, Barron’s “Today I am starting to behave aggressively. Everything we deal with is significantly cheaper than six to 112 months ago.”

Arif Husain, manager of the T.Rowe Price Dynamic Global Bond fund, Barron’s “The market is fighting between two big narratives,” says Mr. Husain. “The first is that the economy is going to collapse, and that will take inflation down with it. Narrative No. 2 is that economic growth will slow, but that inflation will remain sticky to the high side.”

Jerome Powell, Federal Reserve Chairman, in House Testimony, Barron’s “We can’t fail at this. We really have to get inflation down.”

Nicholas Jasinski, writer for Barron’s, THE TRADER “The Federal Reserve is serious about fighting inflation- may be more serious than investors give it credit for. And that means there is more pain ahead for the stock market.”